Lake Champlain is surrounded by beautiful state owned Islands; Mosquito, Burton, Woods Island and Kill Kare State Park. Rent a SUP and explore on your own or do a SUP tour around Lake Champlain with a guide ($25 per hour additional fee) 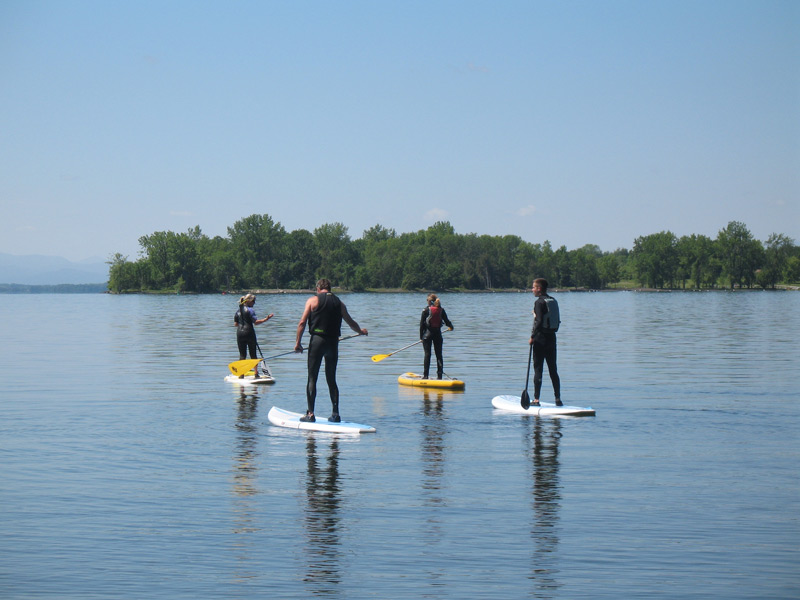 At Kite N Paddle you can do different SUP tours

VISIT OFFICIAL SITE
Woods island is a good one hour SUP from our location and so worth it!! Measuring one mile long and a quarter mile wide, 125-acre Woods Island provides a unique habitat for a rich variety of plant life, including many species that are rare or threatened in Vermont. A portion of the island was once farmed; traces of drainage ditches remain today. Still visible also is the farm house foundation and weathered remains of old farm machinery. A later attempt by a private developer saw the beginnings of an airstrip constructed down the center of the island; the earth berms you climb over on the cross-island trail are the runway edges. The State of Vermont’s Department of Forest, Parks and Recreation seeks to preserve the primitive character of the island and asks your cooperation in observing its guidelines for your cooperation in observing its guidelines for island use.

State park is named for Kamp Kill Kare, a summer camp for boys, which operated on this site from 1912 until 1966. Located on the southwestern tip of St. Albans Point, a three-mile peninsula that defines St. Albans Bay, Kamp Kill Kare is surrounded on three sides by the sparkling water of Lake Champlain. The three-story building in the center of the park was built in the 1870’s and operated as a summer resort hotel known as The Rocky Point House. The hotel operated off and on under various owners until 1912, when the boys’ camp purchased the property. Besides the big hotel building, known as “The Main House,” during the camp years, the camp included tennis courts, a baseball field and several small cabins.

Recognizing the need for a mainland base from which to service Burton Island State Park, the State of Vermont purchased the 17-acre Kill Kare property in 1967 after the camp closed. The cottages were removed, and the boat ramp was created on the east shore. The breakwater was built to protect the boat ramp and ferry dock. Some group picnicking was allowed on the grounds, but the primary purpose of the park, in the early days, was to support Burton Island. It was not until the mid-1970’s, a period during which water quality within St. Albans Bay was particularly poor, that the public began to come swimming and picnicking at Kill Kare, and to appreciate the park for its clean water and cooling summer breezes.
Kill kare is an easy 10 minute SUP from our location and very pleasant place to enjoy a summer day!

Book your tour today and start enjoying our beautiful area